In this paper, Stacy et al. investigate the possibility to modulate the microbial colonization resistance with the aim of identifying novel microbiota-targeted therapies.

In order to dissect the molecular mechanisms of this phenomenon, the authors used two different mouse models: (1) wildR model, a specific-pathogen-free (SPF) mice originated from germ-free (GF) mice transplanted with microbiota from wild mice, and (2) post-ΔyopM model, a SPF mice previously infected with an attenuated strain (ΔyopM) of the pathogen Yersinia pseudotuberculosis. To evaluate if infection can promote the microbiota-dependent colonization resistance, the authors chose Klebsiella pneumoniae (Kpn) as a model pathogen for its proven microbiota-dictated colonization. Following oral infection with Kpn, both mouse models (wildR and post-ΔyopM mice) showed greater resistance to Kpn compared to control SPF mice. These results, confirmed with other experiments, demonstrate that prior infection enhances microbiota’s colonization resistance.

Furthermore, the authors analyzed the microbiota composition of the two mouse models, in order to identify enriched taxa that may be associated to the observed enhancement of colonization resistance. Interestingly, they found an enrichment of Deltaproteobacteria in both wildR and post-ΔyopM microbiota. A key feature of these bacteria is the fact that they expand in response to taurine, a bile-acid-derived metabolite. In particular, gut microbiota converts taurine to the poisonous gas hydrogen sulfide, an inhibitor of cellular respiration. The authors demonstrate that is possible to train the microbiota with taurine supplementation, thus potentiating sulfide production.

Since pathogens use aerobic respiration to access non-fermentable growth substrates and taurine enhance microbiota’s sulfide production, the authors propose the following model for colonization resistance: in presence of high taurine the gut microbiota produces sulfide, which inhibit pathogen respiration. This result is further supported by the finding that the sequestration of sulfide triggers pathogen respiration and, consequentially, invasion.

In conclusion, the present work reveals a key process of the gut microbiota resistance to pathogen invasion: taurine can serve as a nutrient to boost the resistance of the microbiota against future infections. 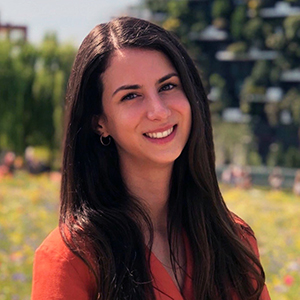 Virginia Amato is a medical biotechnologist with a three-year experience in research in the group led by Professor Nicasio Mancini at the Microbiology and Virology laboratory of “Vita-Salute” San Raffaele University. Her research work focused on the human microbiota of the gastrointestinal and genitourinary tract, particularly on the enteric microbiota in patients undergoing liver transplantation and on the vaginal microbiota in women with idiopathic infertility. At present, she is working as a Business Analyst in Life Sciences and Healthcare at Deloitte Consulting.